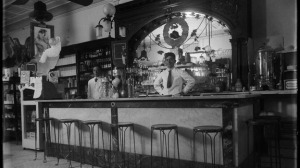 In Soda Revival, Fizzy Taste Bubbles Up From The Past  “All of us are experimenting more and more with the old-school soda fountain drinks,” says Gina Chersevani, lead mixologist at the D.C. restaurant PS7’s.  Chersevani borrows a secret ingredient from the soda jerks of her mother’s generation to mix up an orange cream soda. She picks up a little dish filled with salt-like crystals. It’s a chemical called acid phosphate, which was first used as a replacement for lime when you couldn’t get citrus year-round. Nowadays, there’s been some concern that steady consumption of colas, which still contain phosphate, may leach calcium from bones. But when it’s mixed just the right way as a special treat, it gives drinks a lot of pizzazz.

Canon ready to re-write the book on Capitol Hill cocktails  Previewing the new bar Tuesday night to a group of friends, media types — and a couple contest winners — Seattle cocktailer Jamie Boudreau said Canon won’t have a new-fangled computer point-of-sale system, by jimminy. Instead, tabs will be recorded and tallied by hand with orders being organized on old-timey paper. There is just going to be too much going on behind the bar, Boudreau said, for the computers to keep up.