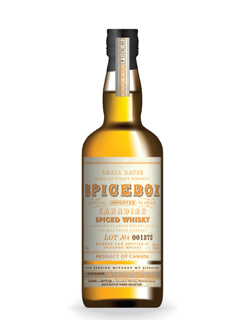 Back in the bad old days of Prohibition, most of the decent whiskey that did make into the U.S. came from our neighbors up north.  Canadian whiskies are almost always a blend, and sometimes mistakenly called “rye”.  Yes, they may have rye in the grain bill, but that doesn’t mean it’s necessarily rye whiskey.  In the U.S. rye whiskey must legally contain at least 51% rye to acquire the designation, in Canada there is no such law.  In fact, it may be as low as 10% or as high as 100%.

In any case, a new Canadian whiskey has made its way across the border which adds even more to the mix.  Using a blend of 3-6 year old bourbon barrel aged whiskies along with three types of vanilla bean and other spices, Spicebox is an almost dessert-like spirit that is definitely unique and worthy of experimentation, especially in tiki style drinks where it will stand in nicely for spiced rum.

Spicebox Canadian Whiskey (80 proof)
Visual: Pale crystalline gold.
Nose: Sweet, with loads of vanilla and pipe tobacco.
Taste: Quite sweet, but with a lot of cinnamon and nutmeg spice as well.  There is a  full and rich quality that comes from the higher alcohol content than you will typically find in a spiced spirit.
Finish: Fairly short, leaving a wintry holiday taste on the tongue.
Overall: The rye adds a good deal of spice to what could be an otherwise over-sweet flavor profile.  This makes for an excellent mixer with cola, or a more intense dessert type cocktail.
GSN Rating: B+

For more information go to: Spicebox