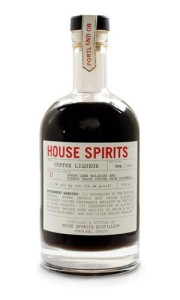 Portland is a hotbed of creative drinking culture.  Coffee roasters, trend-setting cocktail bars, and even a comedy TV show entitled, “Portlandia” features “Wild Flag” lead singer and guitarist Carrie Brownstein.  So, it follows that one of the leading distilleries of the Oregon city thinks outside of the box, forging their own spirited trail beyond the usual vodka, gin and whiskey portfolio of many other independent distilleries.

White Dog is currently a white-hot spirit, but there still aren’t a whole lot of them being produced.  Aquavit is even more obscure and difficult to locate on your local liquor stores’ shelves.  Coffee liqueur is often no more than alcoholic simple syrup with artificial flavoring.  The only liquor House Spirits creates, that even comes close to being typical is gin; and even that is a unique hybrid of styles.

House Spirits is a company that bears watching, because they are leading the way in New World spirits and liqueurs.

White Dog (100 proof)
Visual: Clear.
Nose: Reminiscent of wet leaves.  There’s a hint of junmai sake as well.
Taste: Fairly intense alcohol, but not as hot as some moonshines.  Barley sugar candy and a dry, resin-like character.  Mild pepper spice.
Finish: Tannic and almost tea-like.  The pepper spice comes through in the back of the throat.
Overall: Simple, yet effective.  By using malted barley instead of corn, the overall character is less sweet and more focused on the inherent grain.
GSN Rating: B

Aviation American Gin (84 proof)
Visual: Clear.
Nose: Immediate juniper notes, with some citrus.
Taste: Sweeter than I was expecting, and more silky.  The mix of botanicals is well-balanced with the spirit, creating a cohesive whole that is in line with the major English Dry gins.
Finish: Short and refreshing.  The citrus colors the palate well, almost with a tinge of lemon.
Overall: Very well done gin, and one that isn’t trying to be edgy.  Perfect in everything from a G&T to your next Martini.
GSN Rating: A

Coffee Liqueur (40 proof)
Visual: Deep dark brown with lighter tan sediment.  (Shake before serving!)
Nose: Remarkably like fresh ground coffee beans.
Taste: Coffee.  The alcohol is not nearly noticeable, instead this is like strong iced coffee that’s had just the hint of sugar added.
Finish: Long and lingering coffee flavor goes on for quite a while.
Overall: The best coffee flavored liqueur I’ve had in years.  Not overly sweet like many, and with a fresh-brewed taste that is entirely natural.  This is exactly what it’s trying to be, and it excels!
GSN Rating: A