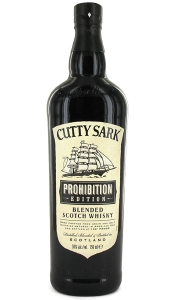 The original Cutty Sark is a British Clipper ship built in 1869.  Amazingly enough, despite a century and a half of English wars and a recent damaging fire, the ship is still in existence.  A popular tourist attraction, it can be visited in London, England where it is dry docked.  The ship was built in Scotland quite near the distillery where it’s namesake whisky has been produced since 1923.  The word “cutty sark” is Scots and is a type of short skirt worn by Nannie Dee, a fictional witch created by Robert Burns in his famous 1791 poem, “Tam o’ Shanter”.  The ship and the whisky obviously share a lot of history.

This latest entry into the Edrington Groups’ Speyside portfolio, seeks to capture some of the mystique of prohibition era alcohol, as well as exhibit a more robust character.  I think they’ve done quite well.

Cutty Sark Prohibition (100 proof)
Visual: Light gold.
Nose: Light honey sweetness, with a subtle floral scent.
Taste: Initially, quite delicate, sweet and ever so slightly smokey.  The higher proof brings out more body and vanilla oakiness upon the second sip.
Finish: Fairly long with lingering notes of caramel, dark honey, sea salt, oakwood, and some fresh peppercorn.
Overall: A solid blended scotch that has more character than many on the market.  I appreciated the higher proof which brought out a lot of “chewiness” and heft.
GSN Rating: A-

For more information go to: HoldFastSipSteady