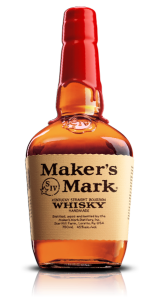 Does anyone remember the great Maker’s Mark controversy of 2013?  The company announced in late winter of that year, that they would be lowering the proof of their bourbon from 45% to 42% to keep up with consumer demand.  The public would have none of it.  It’s amazing how much publicity it generated.  In my mind, reminiscent of what Coca-Cola did when they brought New Coke onto the market in 1985.  Demand for old Coke went up, and they solidified their market. Granted, Maker’s Mark has always had a positive image in the eye of the consumer, but with so many new bourbons coming onto the market, it was a great move to remind people about their product.

Maker’s Mark debuted 60 years ago, and has since been owned by Hiram Walker, Fortune Brands, Beam Inc. and will soon be purchased by Suntory.

Maker’s Mark (90 proof)
Visual: Light maple syrup brown.
Nose: Rich, woody and spicy.  A lot of intriguing character comes through.  You can instantly tell this is a killer bourbon.
Taste: Smooth and bready with a hefty dose of aged corn spirit.  The wood aging adds a spicy character and brings a lot of high notes.  On the other end of the spectrum, there are elements of caramel, cinnamon, burnt vanilla and sweet corn.  A huge variety of flavors make for one intriguing bourbon.
Finish: Lovely and amazingly cohesive.  The fade stays true to itself the entire time, with no one element trying to overpower the finish.
Overall: Elegant and at the same time, self-assured.  The balance of flavors make for an eminently sippable whisky.  Lovely on its own, it also works wonders in classic cocktails like the Manhattan, Mint Julep and Boulevardier.
GSN Rating: A