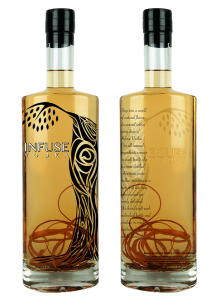 Infused spirits have been around for over 1000 years starting with flavored vodka.  In fact, gin is the most popular form of this alcoholic beverage.  But, the hundreds of flavored vodkas available today are a far cry from the original styles which left the botanicals, fruits and spices to steep in the bottle.  Imagine marshmallow, fruit loops or bubblegum steeping in a bottle.  Not very appetizing visually, and not flavor-wise either.  Avoid those.

Infuse Vodka seeks to use old school techniques with a modern twist.  Using five times distilled Kansas corn and nothing more than the ingredients you can see in each bottle, what you see is what you get.  All natural, no added sugar and taking on the color of the infusions.

Lemon (80 proof)
Visual: Extremely pale gold with tiny particulates.
Nose: Fresh lemon zest.
Taste: This is obviously vodka and not just a flavorless distillate, but the lemon takes it into a higher dimension.  Not sweet in the least, this is a dry and crisp flavor which has a roundness and tang.
Finish:  The lemon goes on for quite a while, with a peppery essence that keeps it from being one-dimensional.
Overall: In some ways, this is almost a cocktail on its own.  Throw three ounces in a mixing glass with ice, stir and strain into a chilled cocktail glass.  Voilà! A Lemon Martini, and a good sight better than many I’ve had.
GSN Rating: A-

Orange Clove (80 proof)
Visual: Pale gold with particulates.
Nose: Definite orange zest with a slight top note of clove.  Reminiscent of the holidays.
Taste: The citrus is sweeter than the lemon, but the clove adds a sharp bite to tone it down and broaden the flavor palate.  The vodka itself seems to work against this combination to some degree with some seemingly harsh edges.
Finish: A fairly long semi-bitter finish that undoubtedly comes from an abundance of clove.  Looking in the bottle, I can see six cloves.  I think one or two would have served it just fine.  Clove is one of the strongest spices and can easily overpower a drink unless used judiciously.
Overall: I like the overall flavor blend here, but I think it is unbalanced.
GSN Rating: B

Cinnamon Apple (80 proof)
Visual: Golden brown with particulates.
Nose: Spiced apple.
Taste: Somewhat sweet and with a defined cinnamon spice.  The apple is rich and surprisingly strong.  I’m curious what species is used.  The mouthfeel is thick and viscous with a dessert character.
Finish: Fairly short, but dry and crisp.
Overall: A much more pleasant apple vodka than the majority of artificial flavored ones on the market.  This would be awesome in a cooking sauce, whipped cream or as an added Autumnal kick in an Old-Fashioned or Manhattan.
GSN Rating: B+

Chili Pepper (80 proof)
Visual: Quite pale gold.
Nose: Vegetal, almost spinach-like.
Taste: More of the vegetal taste comes through which certainly lends character.  There is a surprising sweetness as well after which is a generous portion of mid-palate heat.  The corn distillate works well here to create a sweet and hot vodka.
Finish:  The odd vegetal taste disappears, but the heat lingers on for several minutes.
Overall: I can’t think of a better use for this than in a spicy Bloody Mary, but this would also work well as a shot chased by a pilsner ale.  Heat wise, this is a 3 on a scale of 1-10.
GSN Rating: B