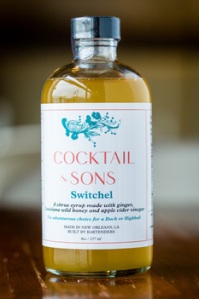 For the third incarnation of its seasonal limited-edition syrups, Cocktail & Sons is looking deep into the past this summer. Since the late 1600s, thirsty Americans have tried to beat the summer heat by sipping switchel, a sweet-tart-spicy syrup made from vinegar, ginger and a sweetener like sugar, molasses or maple syrup. It’s a delicious and refreshing beverage, but not one that’s terribly well-known today. “Switchel was originally most popular in the Northeast,” says Cocktail & Sons founder Max Messier. “But because summers in New Orleans are probably the most brutal you’ll ever find, it was an obvious choice for our summer syrup.”

For Cocktail & Sons Switchel Syrup, Messier lets a mix of fresh-cut ginger, lemon peels and sugar sit for a week to draw out the flavorful oils, then steeps the mixture with lemon balm and orange peel, adds apple cider vinegar and sweetens with honey. And that honey is something very special: It’s produced in New Orleans’ Lower Ninth Ward by Capstone, a non-profit that turns blighted and vacant lots in the Hurricane Katrina-ravaged neighborhood into productive gardens, orchards and apiaries. (Part of the profits from every bottle of sold will go back to Capstone as well.)

The Switchel Syrup will only be sold at wholesale for use by bars but will be available for purchase online as well at a price of $14.95 for an 8-ounce bottle. Switchel Syrup joins Cocktail & Sons’ regular, year-round line of artisanal cocktail syrups, including Haymaker’s Punch, Spiced Demerara, Oleo Saccharum, Honeysuckle & Peppercorns and Mint & Lemon Verbena.

Cocktail & Sons Switchel Syrup: Nicely balanced and with a viscous mouthfeel.  Quite sweet and lemony (as it should be), but set off with tingling heat from the ginger, a funky sourness from the vinegar cider and a touch of mellow honey.  This switchel will work with just about any cocktail you can think of that calls for a citrus simple syrup.  We recommend trying this in your next tiki or faux-tropical libation.  You won’t go wrong.  Great stuff!  GSN Rating: A

For more information go to: Cocktail and Sons