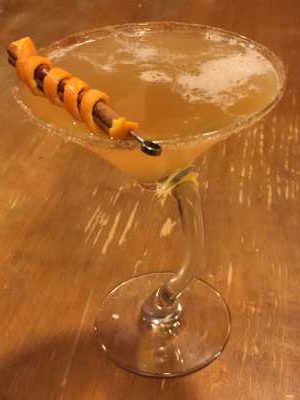 This is a cocktail that doesn’t know what it’s trying to be.  There is way too much going on here. Apricot, lemon, peach, cinnamon.  The closest thing I can compare it to a some ooey-gooey dessert that you only need one bite of.  And that’s pretty much what happened to me.  I love cocktails, but after one sip, I knew this one was not for me.

First of all, it has way too much sweetener.  You can easily cut the simple syrup in half.  Next, the rim simply must go.  The cinnamon doesn’t add anything to the drink.  So, having done those two things, you’re left with a passable sort-of-tiki kind of drink.  I do like the garnish.  In fact, that was the highlight for me.  I took a long thin spiral and stuck one end in the bottom of the cinnamon stick and used a fancy cocktail pick to hold on the other end.

One thing to consider is the size of the glass.  As listed this drink will make over 5oz of drink.  I would suggest cutting it down by a third, so you end up with at least a manageable sized cocktail, albeit one that still isn’t spectacular.

So, with some tweaking you may end up with something close to palatable.  Just proceed with caution.