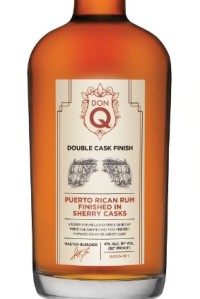 To create the rum, Soto hand selects and blends rums that were aged for five to eight years in American white oak barrels. This blend of rums is then aged for an additional year in sherry casks that were previously used in the aging of Spanish Oloroso Sherry.

Don Q Double Cask Finish Rum (82 proof)
Visual: Orange-copper.
Nose: Soft and inviting sherry top notes overlaid on a rich and almost candy-like rum base. A lot of vanilla, medium wood and sweet caramel.
Taste: Surprisingly, for all of the sweetness on the nose, this is quite dry and oaky. The sherry lightens things up, but it still remains a very wood-forward rum. There is a lot of mid-range in the flavor profile, making this a strong contender for tiki style cocktails.
Finish: Medium long, with more of the caramel playing out at the tail end of the fade.
Overall: An excellent rum that tastes like an anjeo. Recommended for rum old-fashioneds and the like.
GSN Rating: A-