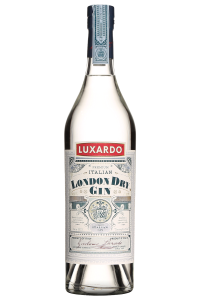 Luxardo’s production of an ancestral juniper-based distillate can be traced back to 1833, only eleven years after the distillery’s founding in Zara, Dalmatia. This distillate serves as the blueprint for the Luxardo family’s Ginepro di Dalmazia recipe, developed in the early 1900s and now used to create the newly released Luxardo London Dry Gin. It employs a selection of nine botanicals, including juniper, coriander, iris, angelica, licorice, cinchona, cinnamon, cardamom, and bitter orange, which are infused for 24 hours in a traditional copper pot still prior to distillation. The distillate is refined for 19 days before being filtered, diluted to an ABV of 43%, and bottled.

“We are proud to introduce our Luxardo London Dry Gin to the United States market, as it carries almost as much history as our Maraschino Liqueur, which inspired my family to found our first distillery in 1821,” says Matteo Luxardo, export director and sixth generation of the Luxardo family. “The recipe and tradition behind Luxardo London Dry Gin survived World War II, carried from Zara to our current distillery in Italy, and finally gives drinkers the ability to build Italian classics like the Negroni and Cardinale with Italian gin, as well as modern cocktails that also require our premium liqueurs.”

Luxardo London Dry Gin (86 proof)
Visual: Clear.
Nose: Loads of juniper out of the gate, followed by more diffuse elements of coriander, cardamom and licorice. Very little citrus is apparent, but a very concentrated sachet of herbs and spices.
Taste: Crisp and with a lot of biting juniper flavor. Intense, dry and quite bracing. The flavors are well blended and begin to open up after a minute, lending softer notes that fill in the lower end of the flavor spectrum.
Finish: Medium long with a tailing finish the end on a dry note.
Overall: A very well distilled and blended London Dry style, which will not disappoint gin fans looking for tradition. We recommend this in any gin forward cocktail or punch.
GSN Rating: A

For more information go to: Luxardo