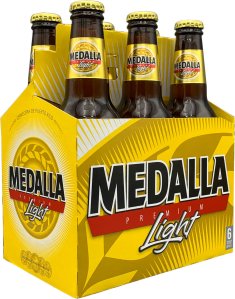 Medalla Light has made its mark on the beer industry with rapid growth into the U.S. and success in the Northeastern corner of the states as well as in its first, Florida, the Sunshine State. The iconic beer completes a major milestone with its wide expansion into six new territories, including New Jersey, Pennsylvania, Virginia, Maryland and Washington D.C. in just a two-month period. The release of Puerto Rico’s top selling beer in Massachusetts solidifies Medalla Light as a competitive player in the brewing industry.

“We are thrilled to team up with Cervecera de Puerto Rico,” said Anthony Frasco, General Manager and VP at Quality Beverage in Chicopee. “When you have a brand that ignites the consumer, and can bring nostalgic memories, having consumers feel like they were back on a tropical island like Puerto Rico the way Medalla Light does, you know it’ll only be a matter of time before they become a national player in the industry.”

GSN’s Thoughts: This is a great beer for hot and humid weather. Very light in body, character and flavor, you can easily call this a session beer. GSN compared Medalla to other light beers from the US and Europe, and found that it held up well. Brewed in the lager style, this is a great entry level beer for the beginner, but also a classic way to celebrate Puerto Rican culture and pair with a platter of mofongo, empanadillas, pastelles or pollo guisado. GSN Rating: B