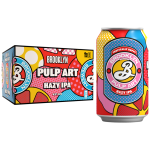 Brooklyn Brewery is launching Pulp Art Hazy IPA as the newest addition to its core lineup. At 6.5% abv, it was brewed with Citra, Strata, and Simcoe hops and features a Pop Art-inspired label and logo created by drinks design and branding agency Thirst. Pulp Art is the first hazy IPA in Brooklyn Brewery’s year-round stable. It’s rolling out this month across the company’s 30+ state distribution area in 6- and 12-packs of 12-ounce cans and 4-packs of 16-ounce cans, as well as in Brooklyn’s new IPA For All variety pack; a 6-pack will retail for $10. Additionally, the variety pack will be the exclusive home of another new release, Parktime IPA (5.7% abv).

San Diego, California-based Ballast Point is launching its first new additions since 2019 with two new labels—Big Gus and Wee Gus—joining the brewery’s year-round portfolio. Big Gus is a clear, dry IPA at 6.5% abv, while Wee Gus is a hoppy lager at 4.2% abv that was originally called Hop Soda due to its clearness and resemblance to tonic water. Both are available now in southern California and Arizona, with Wee Gus priced at $11 a 6-pack and Big Gus at $12.