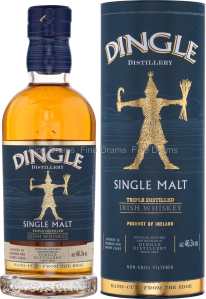 After years in the making, Dingle Distillery is proud to announce the U.S. debut of its highly anticipated launch of Dingle Single Malt Whiskey, its first core expression.  Comprised of malt whiskey that has been matured in ex-Bourbon (39%), and PX Sherry Casks (61%), for six – seven years, the Dingle Distillery is a triple distilled, non-chill filtered whiskey bottled at 46.3% ABV.

“We are one of few distilleries in Ireland solely producing our own spirit – we don’t buy from or sell to other distilleries, and this exceptional quality is evident with the launch of our first core spirit.” says Elliot Hughes, Managing Director at Dingle Distillery.

Dingle Master Distiller, Graham Coult, used first fill only casks to produce a richer flavor, while the sweetness from the Sherry casks helped to get the flavor in quickly, producing a full-bodied spirit.

GSN’s Remarks: Light in body, but rich with flavor, this Irish has a darker character than the more familiar brands on the market. There’s almost a flavor of woody mushroom or beef stock here, which we find peculiar. The Sherry cask adds a hint of sweetness, but not nearly as much much as we expected. Notes of tannin, dried leaves, roasted coffee bean, dark chocolate and pumpernickle keep things moving in a dark direction. A very different whiskey that leans toward the opposite end of the Irish Single Malt spectrum. GSN Rating: B+