San Francisco’s 21st Amendment Brewery has launched Tasty Double IPA, the latest addition to the hop-forward line of beers produced by the brewery. This release is made with Calypso, El Dorado, Mosaic, Amarillo, Idaho 7, and Cashmere hops, and comes in at 8.5% abv. The beer is rolling out now in 6- and 12-packs across the brewery’s 33-state distribution footprint. 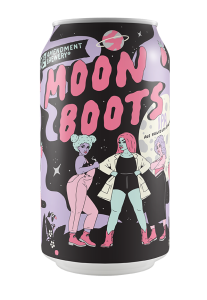 21st Amendment Brewery advocates for the advancement of exceptionally talented women in partnership with the Pink Boots Society for the limited-edition release of Moon Boots IPA. Coinciding with the nationwide release of Moon Boots IPA in April 2021, 21st Amendment Brewery is funding three Certified Cicerone Level-Two Course & Exam Scholarships and one “Women In Leadership” Certificate Scholarship at eCornell University exclusively for Pink Boots Members to apply for.

Moon Boots IPA was designed and created by an all-woman team at 21st Amendment Brewery. The project was spearheaded by Sarah Swafford (National Sales Manager), who says, “21A has been incredibly supportive of Pink Boots Society for many years and has participated in several Pink Boots beers. Moon Boots IPA was initially a small batch beer that we called Pink Brüts! and was brewed at 21st Amendment’s downtown San Francisco brewpub for International Women’s Day (2019). We developed the recipe and concept using the Pink Boots hop blend. When it was released, it was so well received at the pub, taproom, and participating accounts we knew it would be a great candidate for one of our nationwide limited-edition releases.”

Swafford has a long time connection to Pink Boots Society. “When I moved to the Bay Area, I joined my local Pink Boots chapter to connect with other women in the industry. It was such a great opportunity to support and learn from other women who worked in all facets of the industry: brewers, bar owners, bartenders, beer buyers, lab, etc. I found that Pink Boots offered me a great community and friends while enhancing my beer education that’s led to me elevating my career.”

GSN’s Remarks: The strawberry comes through loud and clear, while the hop blend adds a bitter pineapple tang. Really interesting and refreshing. Not quite a sessionable beer, this brew will nonetheless prepare you for more brewed goodness. We also applaud the female focus in a typically male dominated industry. 21st Amendment shines a beacon of hope in these difficult times. GSN Rating: A

St. Louis-based brewer Schlafly Beer has launched Wintery Haze, the latest seasonal from the brewery. The 6% abv ale is brewed with malt, oats, wheat, and Idaho 7, Strata, and Sabro hops to create a beer with a thick, opaque haze. Wintery Haze is now available in 6- and 12-packs of 12-ounce cans throughout the company’s 14-state distribution footprint and at the Schlafly brewpubs. Six-packs will retail for around $10 nationwide.

San Diego, California-based Ballast Point has announced a number of seasonal releases. First up is annual offering Victory at Sea, an imperial porter brewed with coffee and vanilla that clocks in at 10% abv, available now on draft in all Ballast Point taprooms and in 6-packs of 12-ounce bottles. Starting this month the brewery is launching a monthly sour draft program at its Miramar, Little Italy, Home Brew Mart, Anaheim, and Long Beach locations. Kettle sour beer Sour Wench will anchor a lineup that will include flavored Sour Wench variations and a Foeder Sour, to be released when ready. On November 18, the same locations will release the first installment of Ale Nog, a cream ale brewed with nutmeg, lactose, and vanilla, served on nitro at 6.2% abv.

Anchor Brewing Company, based in San Francisco, is launching its 2020 Christmas Ale. This year marks the 46th installment of the limited-edition release and the first from recently appointed brewmaster Tom Riley. Originally brewed as a pale ale, this year’s version is a spiced brown ale clocking in at 7% abv, the highest in Christmas Ale history. The label for this year’s installment features the Three Graces—sequoia trees from the Mariposa Grove in Yosemite National Park. Anchor Christmas Ale is available in gold foil 50.7-ounce magnums as well as 6-packs of 12-ounce bottles, now through January. 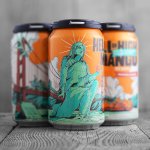 Ventura, California-based Flying Embers has announced three new flavors of hard kombucha, part of what the company is calling the Flight Series. The new flavors are Blueberry Cassis (7% abv), Rhodiola Rose (7% abv), and Watermelon Basil (4.5% abv), which also has added sea salt. The new releases are available from the company’s taproom as well as throughout its distribution footprint in 16-ounce cans.

Vermont-based Citizen Cider is launching a new range of hard seltzers. Citizen Seltzer is debuting in three varieties—Apple All Day, Ginger Love, and Lemon Spritz—across Citizen’s 14-state footprint. Made using only local ingredients from Vermont, the new offerings are at 5% abv and come in at 100 calories, 2 grams of carbs, and 1 gram of sugar a 16-ounce can. A mixed pack will join the launch starting next month. Citizen’s core cider range includes the traditional semi-dry Unified Press, ginger-infused The Dirty Mayor, dry-hopped The Lake Hopper, and dry ale-style Wit’s Up varieties. 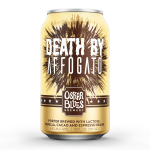 Longmont, Colorado-based Oskar Blues Brewery has launched Death by Affogato Porter. The 6.5% abv beer is brewed with chocolate malt, malted oats, vanilla, lactose, cacao nibs, and coffee sourced from Colorado’s Traction Coffee Roasters. Affogato is the second release in the Death by Porter series, following January’s Death by King Cake. The beer is now available across the U.S. in 4-packs of 12-ounce cans.

Inglewood, California’s Three Weavers Brewing Company has announced Even Sassier, a new rye IPA. The 7.2% abv ale is this season’s reinvention of Three Weavers’ Return of Sassy Rye IPA, this time as a hazy IPA brewed to bring out citrus and fruit notes without sacrificing the flavors from the rye in the mashbill. Even Sassier is now available for pickup from the brewery and in retailers throughout California in 4-packs of 16-ounce cans.

Anheuser-Busch InBev has announced Stella Artois Solstice Lager, a new summer seasonal from the Belgian brand. The 4.5% abv lager has 105 calories per serving and is brewed with citrus essences for a crisp, summer-friendly beer. Initially launching in Phoenix next week, Stella Artois Solstice Lager will roll out nationally beginning June 8 in 6- and 12-packs of 12-ounce bottles through Labor Day.

San Francisco, California’s 21st Amendment Brewery has launched its latest seasonal release, Tropical Sparkale. The 4.2% abv ale is made with pineapple, coconut, and apple, and is brewed to reduce gluten in the final product. Tropical Sparkale is now available in 6-packs of 12-ounce cans throughout 21st Amendment’s 30-state distribution footprint.