Downingtown, Pennsylvania’s Victory Brewing Company has entered the hard seltzer market with Victory Waves, a new release that marks the brewery’s 25th anniversary. Victory Waves comes in Lime, Mango, Mixed Berry, and Orange, each at 5% abv and with 100 calories per 12-ounce serving. The seltzers are rolling out this month in a 12-can variety pack throughout Pennsylvania, Maryland, New Jersey, Delaware, Virginia, Connecticut, and Washington D.C.

New York City-based Craft+Carry has announced a sixth location, the company’s first outpost on the Upper West Side. The new location is on Amsterdam Avenue between 82nd and 83rd streets, and features growler and crowler refills, plus a wide selection of local and craft beers in bottles and cans. To celebrate the grand opening, Craft+Carry collaborated with local brewer Finback to create Slice of Sunshine, a 6.5% abv IPA with blood orange, guava, and Mosaic, Citra, and Simcoe hops.

Brooklyn, New York’s Sixpoint Brewery has announced Party Poppers, a new variety 12-pack of hard seltzers, marking the brewery’s entry into the popular category. All of Sixpoint’s seltzers come in at 5% abv and 100 calories per 12-ounce can and the pack features four flavors: Tiki Lemon Bar, Cucumber Lime Daybreak, Triple Berry Disco, and Passionfruit Orange Guava Punch. Sixpoint’s hard seltzer is set to roll out to the brand’s core northeast markets in May.

Portland, Maine-based Allagash Brewing Company is launching Truepenny Pilsner, a Belgian-style pilsner with a hint of wild beer flavor. It’s a specialty release that’s being distributed in 4-packs of 16-ounce cans. At 5.1% abv, the beer’s concept was developed through Allagash’s pilot program that allows any employee to submit a beer idea. Truepenny will be available throughout Allagash’s 18-state distribution footprint, which includes much of the eastern seaboard, as well as California and the Chicago area. 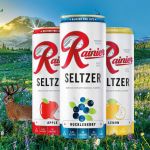 Rainier Beer, the historic Seattle brand that’s now owned by Pabst Brewing Co., is releasing a line of Rainier Seltzer. The new line extension will come in Huckleberry, Apple, and Lemon flavors, all at 4.6% abv. Rainier Seltzer will be sold in variety 12-packs of 12-ounce slim cans. Each can contains 90 calories, 0 grams of sugar, and 1 gram of carbohydrates. Rainier Seltzer is now available in stores in Washington and Oregon.

Diageo has announced Guinness Salt & Lime Ale, the latest release from the company’s Open Gate Brewery in Baltimore, Maryland. The 5% abv brew is made with Key lime puree and salt sourced from the Chesapeake Bay. While this new release is a world apart from Guinness’ flagship stout, the beers share a yeast strain, according to the company. Guinness Salt & Lime Ale will be available for a limited time in select markets like Maryland; Washington, D.C.; and Northern Virginia in 6-packs of 12-ounce cans for around $11.

Portland, Maine’s Allagash Brewing Company has launched North Sky, a new stout, and is bringing back fan-favorite Haunted House, a dark hoppy ale. North Sky is at 7.5% and brewed with a Belgian yeast to impart fruit character to the beer’s roasty core, according to the company. Haunted House is a 6.66% abv ale brewed with roasted barley and Blackprinz malt, plus Crystal, Nugget, Cascade, and Northern Brewer hops. Both brews will roll out this month in 4-packs of 16-ounce cans across the brewery’s distribution footprint. North Sky will also be available on draft at a later date.

Middlebury, Vermont’s Aqua ViTea has launched two new flavors in its AfterGlow line of hard kombucha. The releases—Cherry Sour and Apricot Dream—come in at 5% abv and expand the AfterGlow line up to four, including the previously released Ginger Blue and Citrus Rush. AfterGlow Hard Kombucha is available in 4-packs for $10 and 6-packs for $12 in select markets.

Abita Springs, Louisiana’s Abita Brewing Company has added Jockamo Juicy IPA to its year-round lineup. The 6% abv ale is brewed with Citra and Apollo hops, plus a blend of experimental hop varieties to create a hazy IPA with tropical fruit flavors. Jockamo Juicy IPA is now rolling out in 6-packs of 12-ounce cans and on draft throughout Abita’s distribution footprint. Abita is the 24th-largest craft brewer in the U.S., according to the Brewers Association.

Hershey, Pennsylvania-based Tröegs Independent Brewing is releasing Lucky Holler Hazy IPA as part of its Hop Cycle series of seasonally rotating IPAs. A trip to the Yakima Valley in Washington State, a major hop producing area, inspired the selection of Citra, Simcoe, and Galaxy hops to pair with the beer’s hazy profile. At 6.8% abv, it is available now through the fall on draft and in 12-ounce cans and bottles throughout Tröegs’ distribution area.

Portland, Maine’s Allagash Brewing Company has launched Two Lights into wider distribution. The 6.7% abv lager was initially brewed as part of the company’s pilot system, which takes employee ideas and recipes from development to production. The beer is brewed with Sauvignon Blanc must and is fermented with both lager and Champagne yeast. The brew will initially be available in Maine, New Hampshire, Vermont, Rhode Island, Massachusetts, Connecticut, New York, New Jersey, Pennsylvania, Maryland, Delaware, and California before rolling out in the rest of Allagash’s distribution footprint throughout August.

Chico, California-based Sierra Nevada Brewing Co. has announced the release of Dankful IPA. The 7.4% abv, West Coast-style IPA will begin rolling out nationwide in mid-September. Accompanying the launch of Dankful is Sierra Nevada’s pledge to donate at least $1 million to various charities over the next year, which will be supported in part by sales of the new beer. The brewery is kicking off this effort with a $250,000 donation to World Central Kitchen for Covid-19 relief.

Portland, Maine-based Allagash Brewing Company announced the release of Nowaday Blonde Ale, proceeds from which will go to Covid-19 relief efforts. Now available in Maine and rolling out soon to Allagash’s full footprint, Nowaday is a Belgian-style blonde ale at 5.5% abv. For any 4-pack of Nowaday purchased in Maine, 100% of the profits will be donated to the state’s Good Shepherd Food Bank, which partners with more than 450 agencies throughout the state. Nowaday is available through Allagash’s home beer delivery service and curbside pickup for patrons in the Portland area.

Austin, Texas-based Lone Star Beer has announced Rio Jade, the brewery’s first seasonal beer. The 4.5% abv brew is a Mexican-style lager made using Texas-grown barley from Blacklands Malt. The beer will be available in 6-packs of 12-ounce cans for a suggested price of $8. Rio Jade is rolling out now in Texas and will be available in Lone Star’s full distribution footprint in May, remaining in production through the summer. In addition, Lone Star has kicked off the Keep the Lights on Y’all fundraiser, selling t-shirts ($25) to benefit Southern Smoke, an organization assisting restaurants, bars, and distributors.

Park City, Utah-based Wasatch Brewery is launching Guava Rosa as a new addition to its seasonal lineup. Inspired by a trip to Guadalajara for a collaboration with Mexican brewery Cerveza Loba, the Mexican-style ale is brewed with guava and clocks in at 7.1% abv. It’s the latest fruit forward beer from Wasatch, joining seasonal Pickup Lime (4.8% abv) and core brew Apricot Hefeweizen (4% abv). It’s available now in 6-packs of 12-ounce cans ($9) across Wasatch’s 19-state distribution area through July.