Frederick, Maryland-based Flying Dog Brewery and Gaithersburg, Maryland-based Waredaca Brewing Co. are releasing a collaboration called Watch Me Neigh Neigh Spiced Red Ale. Brewed in celebration of Waredaca’s fifth anniversary, the name is a reference to the equestrian history of Waredaca’s farm. It was brewed with cardamom, allspice, cinnamon, ginger, black pepper, and orange peels to capture the holiday season. The release is available now, for sale at Waredaca’s tasting room.

Baltimore, Maryland-based DuClaw Brewing Company is releasing Hoppy Together, a sour ale, as the first in its quarterly release series for 2021. It was made with Mosaic, Azacca, and Simcoe hops as well as lactose. It is at 7.1% abv and will be released in 6-packs of 12-ounce cans beginning in January. Founded in 1996, DuClaw distributes to 19 states and Washington, D.C.

San Clemente, California’s Left Coast Brewing is releasing the fifth edition of its annual South County IPA. The beer is a collaboration between Left Coast and nearby Artifex Brewing and Pizza Port Brewing. It is a limited-edition West Coast-style IPA brewed with Simcoe, Cascade, Centennial, Mosaic, Nelson, and Amarillo hops with forward notes of blueberry and gooseberry. It is available in 4-packs and on tap at Left Coast’s locations in San Clemente and Irvine and on tap in select restaurants in the area.

Elk Rapids, Michigan-based Short’s Brewing has added its Lil’ Huma session IPA to its year-round lineup. Named in comparison to Short’s Huma Lupa Licious IPA, it debuted last summer in the brewery’s Refreshin’ Session variety pack at 4.5% abv and 95 calories. It will be the brewery’s first low-abv year-round offering. Lil’ Huma is currently available on draft and in 12-ounce cans, with 12-packs in market and 6-packs shipping now. It will replace Juicy Brut in the Short’s flagship line up. 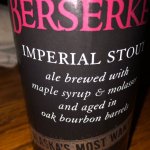 Traverse City, Michigan-based North Peak Brewing Company is relaunching Berserker Imperial Stout after a multi-year hiatus. The 10.1% abv behemoth returns with a tweaked recipe and a Bourbon barrel aged variant. Its flavor profile includes cocoa, dark fruit, currants, and cinnamon. Berserker is available now in 6-packs of 12-ounce cans for a limited time throughout Michigan. Bourbon Barrel Berserker will be available on tap at select locations this winter. North Peak Brewing is part of Northern United Brewing Company and distributes throughout the state, with limited distribution elsewhere.

Boston, Massachusetts’ Harpoon Brewery and Vermont’s WhistlePig have teamed up to create the Bock Hog, a new barrel-finished beer. The lager comes in at 9% abv, and is finished in the Spanish oak and South American Teakwood barrels used to mature WhistlePig’s the Boss Hog VII: Magellan’s Atlantic. The limited release is now available in individual 22-ounce bottles and on draft at Harpoon’s breweries in Boston and Vermont.

Newport, Oregon’s Rogue Ales & Spirits announced its first release of 2021. January 1 will be the debut of Colossal Claude, a new year-round Imperial IPA featuring a sea monster on the can. Brewed with Cascade, Chinook, Citra, and Strata hops, it’s at 8.2% abv and will join Batsquatch Hazy IPA in the brewer’s monster-themed lineup. It will be available nationwide in 6-packs of 12-ounce cans, 19.2-ounce cans, and on draft. Colossal Claude and Batsquatch will face off in Rogue’s Monsters of IPA campaign this spring, with more details forthcoming next year.