William Grant & Sons is releasing a new Balvenie single malt expression exclusively for the U.S. market. Tun 1401 Batch 9 ($250) is a 49.3%-abv whisky sourced from 11 traditional whisky casks and three sherry butts, whose ages span a number of decades. It rested for several months in Tun 1401, one of the distillery’s unique “marrying vessels,” which also produced the previous limited releases Batch 3 and Batch 6. The Balvenie Tun 1401 Batch 9 will be distributed in limited supply beginning this month. 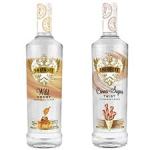 Brown-Forman has added a new seasonal variant to Jack Daniel’s, Winter Jack. A blend of apple cider liqueur, Jack Daniel’s Old No. 7 Tennessee Whiskey and holiday spices, the new product is suggested to be served warm and touted as “reminiscent of apple pie complemented with Tennessee whiskey and seasonal spices, with a finish of toasted oak and vanilla.” Winter Jack is hitting 30 U.S. states and Canada this month.

Glenmorangie is set to introduce a very limited offering of what it calls the “world’s first extra-matured single malt,” Glenmorangie 1963. Packaged in a commemorative bottle including its original label, 1963 was extra-matured in Spanish Oloroso Sherry casks for almost two years prior to its original release in 1987. Glenmorangie says it recently uncovered 50 bottles of the historic whisky in its Highland warehouses. Twenty of them will be made available for purchase in the U.S. through high-end stores at a suggested price of $2,600 each.

Fort Worth, Texas-based Firestone & Robertson Distilling Co. has launched its flagship T-X blended whiskey brand in Louisiana. Currently available in the state both on- and off-premise via Glazer’s, T-X is a blend of select whiskies priced at around $35 a bottle. Louisiana marks brand’s first expansion outside of its home market of Texas. A craft whiskey distillery established in 2010, Firestone & Robertson is planning to debut a straight Bourbon made with locally-sourced corn, wheat and yeast as the second offering in its portfolio.

Pernod Ricard is returning its Pernod absinthe to its original recipe. The brand’s revamped formula was reconstructed in a two-year process from records that show how it was made in the 1800s, prior to the U.S. ban on absinthe from 1912-2007. Changes include a move from neutral grain to neutral wine spirit for the base, with grapes sourced from Languedoc as specified; the usage of grande wormwood sourced from Pontarlier, the historical home of the brand where the original factory was founded in 1805; and natural coloration through the maceration of green nettles, instead of added dyes and artificial colors. The remade Pernod (136-proof) will first appear at several leading New York City retailers, priced at around $68 a bottle.

35 Maple Street, the spirits unit of Sonoma-based The Other Guys, has released two new limited-edition versions of its Masterson’s whiskey brand. Masterson’s 12-Year-Old Straight Wheat Whiskey ($79), at 50% abv, is made from Canadian wheat and glacial water, distilled in a copper pot still and aged in white oak casks. Masterson’s 10-Year-Old Straight Barley Whiskey ($79), at 46% abv, is made from Canadian barley and glacial water, double-distilled and also aged in white oak casks. Some 2,337 cases (14,022 bottles) of the 12-Year-Old Wheat and 1,954 cases (11,724 bottles) of the 10-Year-Old Barley will be available. The Other Guys, run by August Sebastiani, launched 35 Maple Street in 2011 with Masterson’s Rye ($79) and has since followed with Uncle Val’s Botanical Gin ($35-$40) and Kirk & Sweeney Dominican Rum ($40).

South Carolina-based High Wire Distilling Co. has made its debut in its local Charleston market with the launch of Hometown vodka and Silver rum. Initially rolling out into retail outlets this week, the pair will also be available at local bars and restaurants in the near future. Priced at $27.99, Hometown vodka is a gluten-free offering made with 100% corn, while Silver rum is produced using Barbadian molasses and will retail for $23.99. High Wire, which bills itself as Charleston’s first distillery since Prohibition, distills its spirits using a handmade German copper still.

Several new limited-edition malts are joining the Campari America portfolio across the Bowmore, Auchentoshan and Glen Garioch brands. Bowmore is welcoming a new addition called The Devil’s Cask, named for a local Islay legend in which the devil stows away in a barrel of Bowmore bound for the mainland. A 10-year-old Scotch aged in Oloroso Sherry barrels, Devil’s Cask is at 56.9%-abv and will retail at around $90, with 1,302 bottles coming to the U.S. starting next month. Atop the pricing ladder, Bowmore is introducing a 50-year-old, retail-priced at around $20,000 a 750-ml. It’s replacing a 40-year-old that was priced at $15,000. Devil’s Cask and the 50-year-old join Bowmore’s recently added Dorus Mor (55.1%-abv), a 10-year-old priced at $120, of which 2,400 bottles were imported. Meanwhile, Bowmore stablemates Auchentoshan and Glen Garioch, from the Lowland and Highland regions respectively, are being extended with small-batch Virgin Oak expressions. Auchentoshan’s is 46%-abv and will retail at around $130 with 2,100 bottles headed to the U.S. Glen Garioch’s is 48%-abv, retails at $110 and is available in an allocation of 1,038 bottles.

Proximo Spirits will expand the Jose Cuervo line with the launch of a cinnamon-infused silver Tequila called Cinge. The new expression will roll out nationwide this fall, priced at $17.99 a 750-ml. bottle, and will also be available in 50-ml., 200-ml., 375-ml., 1-liter and 1.75-liter sizes.

Pernod Ricard’s House of Martell is launching a new Cognac—Martell Caractère. The new variant, available exclusively in California and retailing at $34.99, is meant to pay tribute to Martell founder Jean Martell. Caractère (40% abv) is produced using grapes sourced from the company’s own vineyards in the Domaine Jean Martell, distilled twice without lees and aged in French oak. 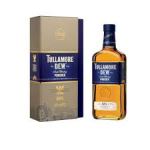 William Grant & Sons has introduced a new variant, Phoenix, to the Tullamore D.E.W. Irish whiskey range. Phoenix, priced at $54.99 a 750-ml., will be an annual limited edition release, with only 2,500 nine-liter cases now available in the U.S. market. The triple-distilled whiskey (55% abv) is finished in Oloroso Sherry casks. Phoenix joins Original, 12-year-old Special Reserve and 10-year-old Single Malt in the brand’s lineup.

Fairfield, New Jersey-based Jersey Artisan Distilling has debuted the first entry in its premium craft spirits range, Busted Barrel dark rum. Made with all-natural molasses sourced from Louisiana, Busted Barrel is aged with a handful of vanilla beans in American oak casks for three months. The 80-proof spirit will be available at New Jersey retail outlets starting next week, priced at around $34.99 a 750-ml. Jersey Artisan Distilling, which bills itself as the state’s first licensed distillery since Prohibition, is also gearing up to launch an eponymous vodka and gin range, as well as Busted Barrel Bourbon and whiskey offerings.

All information courtesy of Shanken