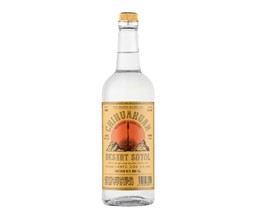 The Marfa Spirit Co. recently announced the launch of their debut product, Chihuahuan Desert Sotol, and the opening of their tasting room in Marfa, Texas. Founded by entrepreneurs Josh Shepard, Seth Siegel-Gardner, and Morgan Weber, the brand’s collection of products will pay homage to the storied past of the distillery’s hometown and celebrate the traditions of the team’s many partners beyond the border. With their debut product, Chihuahuan Desert Sotol, launching in collaboration with Sotol Don Celso and Master Sotolero Jacobo Jacquez in Janos, Mexico, the distillery aims to bring awareness to the spirit of sotol in America. Chihuahuan Desert Sotol is distilled in Mexico and then processed and bottled inside Marfa’s famous 1920s era Godbold Feed Mill-turned-distillery.

Distilled from a plant growing wild in both forest and desert climates throughout Mexico and the Western United States, sotol can be uniquely diverse and regionally specific. Each plant’s tasting notes are wildly affected by the climate and region (similar to the way terroir influences wine). In addition, each sotol plant takes 10-15 years to mature and yields roughly one single bottle. The Marfa Spirit Co.’s project aims to carry on the legacy of this beloved and storied spirit through complex sustainability practices to ensure the plant is around for years to come, and through long-standing relationships with sotoleros in Mexico.

The first and only distillery in Marfa, Texas, The Marfa Spirit Co. is also home to Marfa’s first tasting room, which opened on October 9, 2021. The intimate 2,000 square foot tasting room is located within the storied 1920s Godbold Feed Mill and will offer The Marfa Spirit Co. product tastings alongside a menu of sotol-based cocktails like Ranchwaters, Sotol and Tonic, Margaritas, Palomas, and their Chihuahuan Desert take on a Sotol Old Fashioned.

GSN’s Remarks: Lightly smoked on the nose, with a clean, crisp and vegetal perfume. The flavor is somewhat fruity and cactus-like, with a smattering of creosote patina coloring the distillate. But, like a Highland Scotch, things are tempered and elegant. As the flavors open up, there are some minty notes, bitter cocoa and clove. The finish is long, with a lovely soft fade leaving only a light touch of smoke. This is a great Sotol at a great price point, and a perfect entry for those looking to explore further afield than Tequila. GSN Rating: A

For more information go to: The Marfa Spirit Co.

Glenmorangie, part of the Moet Hennessy portfolio, is launching A Tale of Winter, a new innovation from the single malt Scotch whisky brand. Finished in Marsala wine casks from Sicily, the 13-year-old single malt retails at $100 and is bottled at 46% abv.

Cognac Frapin is introducing two new offerings in the U.S., a VSOP and VIP XO. Frapin’s VSOP is made of 100% Grande Champagne Cognac, aged in limousin oak, and retails at $70 a 750-ml. The VIP XO expression, higher up the ladder, is a blend enhanced with very old Cognacs from the family cellars and retails at $250.

The Singleton is releasing a new 39-year-old single malt Scotch whisky from The Singleton of Glen Ord Distillery. Aged in a blend of casks including Port, red wine, Pedro Ximénez and Oloroso sherries, and then finished in French Bordeaux casks, the new luxury malt was bottled at 46.2% abv and retails at $2,680 a bottle, of which 1,695 are being released globally. The Singleton 39-Year-Old follows on from The Singleton 38-Year-Old within the Diageo brand’s Epicurean Odyssey Series.

Italy’s Villa Massa has launched Vermouth Giardino. The new label is debuting with two options, Vermouth Giardino Mediterranean Dry by Villa Massa and Vermouth di Torino Rosso Traditionale by Villa Massa. The former is a contemporary-style dry vermouth made with Sorrento lemon peels, at 18% abv and retailing for $25 a 750-ml. The latter is a Torino-style sweet vermouth, at 16% and the same price point. They are available now in the U.S. The vermouths join Villa Massa Limoncello and Amaretto in the brand’s lineup.

Jefferson’s Bourbon, part of the Pernod Ricard portfolio, has debuted Ocean Voyage 24, the latest offering in its Ocean: Aged At Sea series. For this release, Jefferson’s whiskey traveled by boat through ports in the Caribbean and Central America, resulting in barrel exposure to high heat and tropical humidity. Retailing at $80 a 750-ml., Jefferson’s Ocean Voyage 24 is now available nationwide. Pernod Ricard acquired Jefferson’s along with the rest of Castle Brands for $223 million in 2019.

Ireland’s Waterford Whisky, founded by industry veteran Mark Reynier, is rolling out a new bottling called Luna, made from biodynamically grown Irish barley. Luna is the latest whisky in Waterford’s Arcadian Series, which showcases rare barleys and forgotten ways of farming. Retailing at $125 a 750-ml., Luna is matured in a combination of 35% first-fill U.S. oak; 17% virgin U.S. oak; 26% premium French oak; and 22% Vin Doux Naturel oak. At 50% abv, it’s debuting in the U.S. in a supply of approximately 21,000 bottles (1,750 cases).

Calirosa Tequila, produced in Jalisco, Mexico, is launching a limited-edition Extra Añejo expression in the U.S. The newcomer is made with 100% blue agave and aged three years in California red wine barrels. Joining Calirosa’s existing lineup of Rosa Blanco and Añejo, Extra Añejo is at 40% abv and is priced at $200 a 750-ml. It’s available to pre-order now on ReserveBar. Calirosa is backed by Maroon 5 singer Adam Levine and his wife, model Behati Prinsloo.

Denver-based Stranahan’s Colorado Whiskey has launched the second edition of Mountain Angel, the distillery’s 10-year-old, limited edition single malt whiskey. Batch 2 is bottled at 47.3% abv and matured entirely in new charred American oak casks. The whiskey carries a suggested retail price of $130 and is available in very limited quantities (roughly 600 bottles for this release) at Stranahan’s distillery and in select retail locations. It joins the company’s original expression and sits alongside other limited releases like Snowflake.

The Whistler Irish Whiskey has announced the annual release of its Imperial Stout Cask and Calvados Cask whiskies. This year’s version of The Whistler’s Imperial Stout Cask Finish—dubbed Batch 002—was made in collaboration with O’Hara’s Brewery in Bagenalstown, Ireland. It’s a blend of 50% wheat whiskey, 35% malt whiskey, and 15% grain, aged six months in casks from O’Hara’s that originally housed sherry, and bottled at 43% abv. Calvados Cask Finish is a continued collaboration with Chateau du Breuil composed of 35% malt whiskey and 65% grain whiskey, aged 15 months in the Chateau’s Calvados casks and also bottled at 43%. Only 3,000 bottles from Batch 002 will be available in the U.S. for a suggested $40.

American Liquor Co. Vodka has expanded distribution into Illinois, Indiana, and Iowa, on the heels of its successful initial launch in Michigan, Ohio, and Wisconsin. American Liquor Co. Vodka is a four-crop blend made from locally-grown Midwest winter wheat, light rye, Rio Grande potato, and white corn, and was co-founded and blended by master blender Chris Montana, who is also the owner of microdistillery Du Nord Social Spirits in Minneapolis. The brand retails at $24 a 750-ml.

Texas-based Marfa Spirit Co. has launched its inaugural product, Chihuahuan Desert Sotol. Led by entrepreneurs Josh Shepard, Seth Siegel-Gardner, and Morgan Weber in partnership with master sotolero Jacobo Jacquez, who is based in Janos, Mexico, the company aims to bring awareness to sotol with its debut product, which is distilled in Mexico and then processed and bottled in Marfa. Chihuahuan Desert Sotol (45% abv) is now available across Texas, retailing at $49 a 1-liter bottle.

Diageo has announced Johnnie Walker Masters of Flavour, a new ultra-limited release celebrating the vast stores of rare whisky available to master blender Jim Beveridge. The whiskies in the blend are all at least 48 years old and come from ghost distilleries like Glyn Albyn, Port Dundas, Brora, and Glenury Royal, as well as Cameronbridge, Blair Athol and Dalwhinnie. The release, one of Beveridge’s last before retiring at the end of the year, is bottled at 41.8% abv, and is limited to 288 bottles, priced at £20,000 (roughly $27,000).

Georgetown, Kentucky’s Blue Run Spirits has announced three holiday releases. First up is Blue Run’s Holiday Rye, available both as an individual bottle and as a gift set. The whiskey is a 53% abv special bottling of the company’s recently released Golden Rye, bottled at a higher proof (up from 47.5% abv) and retailing for $140 across Blue Run’s distribution footprint. Additionally, Blue Run will release a gift set version, with two tumblers from Aged & Ore, through online service Seelbach for $230. Finally, on December 1, Blue Run will kick off 12 Days of Single Barrel High Rye Bourbon, a series which will see bottlings from different barrels released each day. These will be available through Blue Run’s website and will retail for $140.