With only two days to go until Christmas Eve, there’s not enough time to order gifts.  So, until then, we’re going to suggest some items that we’ve rated highly this year that you can find in your local liquor store (hopefully).  For Day 23, we’re focusing on the 30 spirited products that received a GSN Rating of A (93) during 2017. 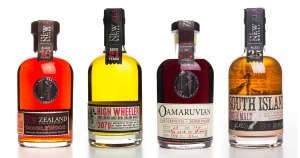 New Zealand might not be the first place that comes to mind when sourcing single malt whisky, but thanks to Scottish settlers in the 1830’s a whisky tradition was born in a place you’d least expect.

The New Zealand Whisky Collection features expressions produced between 1987 and 1994 at the Willowbank Distillery in Dunedin on the South Island of New Zealand. In 2010, New Zealand Whisky Collection founder Greg Ramsay discovered and purchased the last 443 barrels of cask strength whiskies at the distillery, which had been mothballed at the end of the 20th century; Ramsay saw the potential for the complex range of flavors among the quietly maturing barrels. Today, this extensive stock of old and rare whiskies is continuing to mature in a seaside bondstore in Oamaru, on the eastern coast of New Zealand.

Distilled using local barleys and snowmelt from the Southern Alps, the single malt whiskies in the New Zealand Whisky Collection, which reflect the last remaining stock of what was once the world’s southern-most distillery, are produced using traditional Scottish methods of copper pot stills.

Dunedin DoubleCask 16 Year Old (80 proof) A blend of 70% single malt and 30% grain whisky (made from unmalted barley in the Willowbank Distillery). After aging in American Oak for 6 years, it is transferred to French Oak ex-New Zealand red wine casks for 12 Years, resulting in a stunning ruby color.
Visual: Deep orange-red.
Nose: Top notes of fruit and a rich malt palette. Very evocative of autumn and harvest time.
Taste: Quite sweet with wine character, but balanced with char and tannins.
Finish: Medium long with the tangy wine flavor carrying it to the finish.
Overall: A wonderful dessert whisky that has enough aging to perfectly balance the unusual malt/wine character profile. In some ways this reminds me of a sherry, but with much more heft and depth.
GSN Rating: A

Oamaruvian 16 Year Old Cask Strength DoubleCask (116.8 proof) The best casks are hand-picked for these unique single cask bottlings.
Visual: Dark brown.
Nose: Aromatic and punchy. Spices, some vine fruit and toasty malt work in tandem.
Taste: A powerhouse of flavor that only opens up with a splash of water. A definite spice character overrides the bottling. The twice aged cask flavor doesn’t overwhelm, but rather creates a see-saw of char and fruit.
Finish: Long and elegant.
Overall: An imperial style whisky that has a lot to offer. This is a contemplative spirit that reveals itself in shy, humble phrases.
GSN Rating: A-

High Wheeler 21 Year Old Single Grain (86 proof) A blend of 70% single malt and 30% grain whisky (made from unmalted barley in the Willowbank Distillery), this expression is aged in American Oak ex-bourbon casks for 21 years.
Visual: Mild gold.
Nose: Oak forward and intensely compact in approach. Wood permeates the mash bill making a direct approach on the nose.
Taste: Masterful balance of vanilla, caramel, buttercream and richly appointed malt.
Finish: Medium-long with just a hint of smoke at the very end. It all closes like a summer sunset with a wistful farewell on the palate.
Overall: A high point in whiskies. This one reaches the mark with all colors flying. One of the top 10 whiskies we’ve been delighted to sample.
GSN Rating: A++

South Island 25 Year Old Single Malt (80 proof) Distilled in traditional copper pot stills using New Zealand grown malt barley. With this expression, New Zealand reached a milestone by becoming only the fifth country to release a 25-year-old single malt.
Visual: Pale gold.
Nose: Lovely wash of smokiness upon which a fine, high keening note of barley malt sings.
Taste: Bright, clean and very much in the traditional vein. Despite the venerable age of this whisky, it is by no means over-aged. Rather it has settled into a comfortable, relaxed warmth and softness.
Finish: There is a surprising touch of berry which comes out at the very end to give it a final feathery touch of sweetness.
Overall: Remarkably smooth and delicate.  One for the history books and a great find.
GSN Rating: A