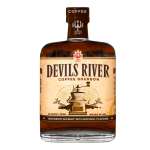 San Antonio, Texas-based Devils River Whiskey has launched a new coffee-flavored Bourbon in its 29-state distribution footprint. The 40% abv whiskey is made from a combination of high-rye Bourbon and locally roasted coffee that is sourced from Colombia, Brazil, and Honduras. The spirit is cold brewed for at least 24 hours before sweetening with agave nectar. Devils River Coffee Bourbon whiskey is rolling out now to markets across the U.S.

Alberta, Canada-based Paradise Spirits has launched its El Tequileño Tequila brand in the U.S. via Park Street Imports. Made in Jalisco, El Tequileño includes five Tequilas in its lineup, all at 40% abv: Blanco ($25 a 750-ml.), Reposado ($27), Platinum ($55), Reposado Gran Reserva ($57), and Reposado Rare ($225), aged for 6 years in an American oak pipon, an extra-large barrel. El Tequileño is available in 13 states.

Rochester, New York-based Geloso Beverage Group has added two new flavors to its Clubtails line of canned cocktails. The new flavors—Strawberry Daiquiri and Blueberry Mojito—are both at 10% abv and are made from a malt base. They join 11 other flavors in the Clubtails portfolio. The RTDs are available in 16-ounce cans and retail for around $2.

Moët Hennessy USA has announced the latest release in Glenmorangie’s Bond House No. 1 collection: Grand Vintage Malt 1996. The 43% abv whisky was matured in American oak casks—air dried and seasoned with Bourbon—for 23 years before bottling. This whisky aged entirely in the company’s specially designed casks. Glenmorangie Grand Vintage Malt 1996 is rolling out now to specialty whisky shops across the U.S. for a suggested price of $825 a 750-ml.

San Francisco-based Hotaling & Co. has launched Junipero Gin in new, completely redesigned packaging. The new look was designed by Stranger & Stranger and features the brand’s name in handwritten script on a blue bottle the shade of a juniper berry. The spirit inside, however, remains the same. The redesigned Junipero will be available exclusively in California in 2020 but will expand to Florida, Georgia, Illinois, Massachusetts, New Jersey, New York, and Texas in 2021.