Waco, Texas-based Balcones Distilling has announced Texas Bock Whiskey, a new malt whiskey made in collaboration with Spoetzl Brewery. The 50% abv straight malt whiskey is made using Shiner Bock’s recipe and proprietary lager yeast before aging in new oak barrels for at least two years. Balcones Texas Bock is available for a limited time at the company’s distillery and in retailers throughout Texas and Oklahoma for around $40 a 750-ml. 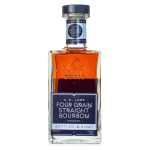 Denver, Colorado’s Laws Whiskey House has released this year’s edition of its Bottled-in-Bond Four Grain Bourbon. This year’s whiskey is a 6-year-old spirit made from corn (60%), wheat (20%), rye (10%), and malted barley (10%), all sourced from Colorado farms. The whiskey is now available across the U.S. in limited quantities for a suggested retail price of $75 a 750-ml. About 500 9-liter cases have been produced.

Seagram’s vodka, part of the Infinium Spirits portfolio, has revamped its Sweet Tea flavor, transitioning to a liquid that’s lighter in color, made using all-natural ingredients, and with 20% less sugar. The new recipe is rolling out this month and will replace existing Seagram’s Sweet Tea inventory as it’s depleted.