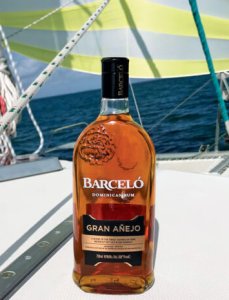 The Ron Barceló line of rums was first released back in 1950 in the city of Santo Domingo in the Dominican Republic, the second-largest country in the Caribbean. The company is certified Kosher and carbon-neutral, proving that it cares about the environment as well as the health of its consumers.

GSN’s Remarks: Ron Barceló Gran Añejo has a medium woody note at the entry, with a lot of sweetness and caramel and toffee notes. The body is somewhat thin, but flavorful. The finish is dry and succinct. A very mixable rum that has some young character, but prefers to play with other ingredients to really shine. GSN Rating: B+

Barceló Gran Añejo Dark Series is another rum altogether. Rich and fulsome with burnt sugar, a touch of molasses, and brown bread sweetness, this has body and depth. The extra char aging tempers the sweetness down to a soft rumble. Round, warm, near chewy and dessert-like, the spirit is lovely on its own or used in a dark rum cocktail or punch. Really well done. GSN Rating: A