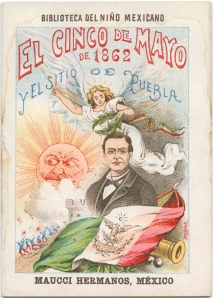 Many people assume that Cinco de Mayo is the Mexican equivalent of the United States’ Independence Day.  Not so.  That originally happened on September 16, 1810.  Instead, Cinco de Mayo took place on May 5th in 1862 and is a day of remembrance for a key battle that took place in Puebla, Mexico.  For both Mexico and the U.S., it was a day that is significant for two reasons.  1) It was the first time that the French had been defeated in any battle in over 50 years, and by an army half its size, and 2) it was the last time a European country tried to invade North America.

Regardless of your nationality, any holiday is always a good time to have a drink or two.  So, in that spirit, GSN is happy to share a few non-Margarita recipes with you to mark the day in style.

Chill coupe glass with ice and water and set aside. Combine all ingredients in a mixing glass. Add ice and stir until well chilled and diluted. Discard chilling ice from the coupe. Strain ingredients into chilled coupe. Using a vegetable peeler, remove a long piece of orange peel. Express the oil over the cocktail, rub the peel around the rim of the glass, and place atop the cocktail.

Combine all ingredients in a shaker and shake vigorously.  Pour into margarita glass.  Garnish with lime wedge.

Shake all ingredients well then double strain into a chilled coupe glass.

Add ingredients to mixing glass and shake with ice.  Strain into chilled cocktail glass.  Garnish with dried red chipotle pepper lengthwise on bamboo spear and laid across top of the glass.

Mix all ingredients except club soda in ice filled shaker and shake vigorously for 30 seconds.  Strain into a chilled cocktail glass and top off with club soda.  Stir gently and serve. 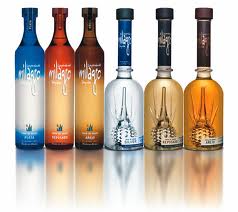 Do you believe in miracles?  Do you love tequila?  Several bottles of this heavenly spirit made their way to the Good Spirits News tasting room recently, and were put through their paces.  The results were nothing short of miraculous.

Milagro (spanish for miracle), grow their own agave plants, which takes 8-12 years until they are mature enough for harvesting.  As well, they slow roast the agave for 36 hours in clay ovens, thereby bringing out the deep and rich flavors that are often discarded by other manufacturers who only roast a few hours in an autoclave.  Lastly, they go an extra step in the process by doing three distillations, instead of the normal two, to further hone the essence of the spirit.  For aging, they use a mix of American oak whiskey barrels and French Limosine oak barrels, which I will note in the tasting comments below.

Milagro Silver (80 proof) – Bottled from the still.  Clear.  Strong agave and citrus notes with a fresh, bright and clean salty character.  Wet forest, cedarwood.  Quite smooth with a hesitant character that seems to only come out upon a second taste.  Almost as if your palate needs to dial down a notch to acclimate to its subtleties.  Don’t get me wrong, this is a well done tequila and easily a perfect choice for a Margarita or Frostbite cocktail.  It’s just that Milagro Silver is the freshman of the Milagro line; likeable, but lacks the character development acquired over time.  GSN Rating: B

Milagro Reposado (80 proof) – Aged in American Oak for six months. Clear with a very light yellow tint.  Darker nose than the Silver, this has more smoke and roasted agave and I hazard to say, a bit more fire.  The taste is not quite as smooth, but with a lot more sweet caramel and vanilla coming out to play.  This makes for a fine sipper, but also adds more body to cocktails.  I’m surprised at the super long finish which not only includes vanilla, but a lot of mint verging on menthol.  There’s a burnt sugar taste that lingers including the characteristic slight bitterness of scorched dextrose.  Pretty intriguing and a spirit that will raise your eyebrows.  GSN Rating: B-

Milagro Anejo (80 proof) – Aged for eighteen months in American Oak. Color of a light scotch, a heathery crystal gold.  Really sweet with lots of roasted agave and vanilla.  As with the other Milagros, this is light in body, but has a lot of the agave flavor out front.  There’s more of that mintiness, but not as intense.  It seems more toned down and plays a secondary roll to the sweetness of the agave.  If you want to try something interesting, use this in a scotch cocktail like a Blood and Sand, or especially a Mamie Taylor where it will work well with the lime and spice of the ginger beer. Mostly tho’, this is a very nice spirit that is perfect to pull out at the end of the day to celebrate the good things in life.  GSN Rating: A-

Milagro Silver Select Barrel Reserve (80 proof) – Aged in French Oak for 30-45 days. The first thing I noticed about the Select Barrel Reserve bottles is the spectacular hand-blown glass agave piña inside the bottle.  The bottle even makes a unique sound as the tequila is poured, due to a unique mechanism in the neck of the bottle.  Crystal clear.  Refreshing and savory nose full of agave aroma, mixed with hints of spice and pepper.  The mouthfeel is exceptionally smooth and almost creamy with hints of spearmint, vanilla, white pepper, coconut milk, and brine.  The finish is medium-long ending with a sweetness.  An exceptionally fine distillation.  GSN Rating: A

Milagro Reposado Select Barrel Reserve (80 proof) – Aged for ten months in French Oak. Clear with the slightest tinge of gold.  A healthy nose of roasted agave with high notes of agave sugar and spice.  Flavors very much in the traditions of Mexican cuisine.  Hints of cocoa pods, cinnamon, even a touch of green chili pepper.  Exceptionally smooth and a more balanced product than the regular reposado.  A beautiful product that deserves to be savored on it’s own.    GSN Rating: A

Milagro Anejo Select Barrel Reserve (80 proof) – Aged three years in French Oak. Beautiful rich roasted pineapple gold color.  Nose has a lot of bright, floral high notes with an almost scotch-like element.  Very light and dry taste gives way to toasted bread, browned butter, salted bacon, and cereal grains.  Hey, this is breakfast in a glass!  The agave character seems to be lost in the blend, however.  Granted, this is a fantastic spirit, but one which has perhaps been in the barrel a bit too long, and thus the wood has taken over the piña flavor.  Still, an amazing and classy spirit, well worth checking out.  GSN Rating: A-

For more information about Milagro Tequila go to: http://www.milagrotequila.com/