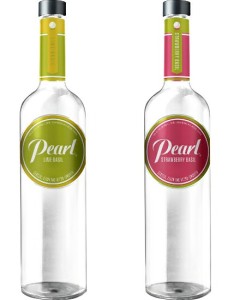 Pearl vodka is made from winter wheat and Canadian Rocky Mountain water. Each bottle is distilled five times and filtered.  Nautral flavorings are then added.

Pearl Lime Basil Vodka (70 proof)
Visual: Clear.
Nose: More lime peel than basil leaf, but a very interesting mix.
Taste: Quite sweet and sugary with a lime forward flavor.  The basil disappears altogether here which is a shame.
Finish: Medium long with a lot of residual sweetness.
Overall: I would have liked more basil presence.  But, on a more positive note, you can drink this straight from the freezer or on the rocks and it works as a decent pre-mixed cocktail.
GSN Rating: B

Pearl Strawberry Basil Vodka (70 proof)
Visual: Clear.
Nose: Strawberry bubblegum nose, with no basil detected at all.
Taste: Again, more of the strawberry chewing gum flavor with a sweetness to match.  No basil makes itself known.
Finish: Medium long with lasting sugary, sweet notes of artificial strawberry flavor.
Overall: A rather flat and disappointing vodka.  This could have been an interesting entrant in the flavored vodka category, but it just doesn’t live up to its promise.
GSN Rating: C-

San Francisco-based Anchor Distilling Company is rolling out a 375-ml. bottle format on its Luxardo Maraschino liqueur, targeting at-home mixology. Made from marasca cherries sourced in the Veneto region of Italy and matured in Finnish ash vats, Luxardo Maraschino (32% abv) serves as a component in classic cocktails such as the Last Word, the Martinez, the Aviation and the Hemingway Daiquiri. Luxardo Maraschino’s new 375-ml. size retails at around $20.

Looking to regain momentum behind Absolut vodka, Pernod Ricard plans to launch an oak-aged vodka under the brand this month, Reuters reports. Absolut Oak seeks to capitalize on the trend toward consumption of oak-aged brown spirits like whisk(e)y. The innovation play comes as Pernod Ricard USA has been trying to emphasize the higher-end Absolut Elyx offshoot in a bid to premiumize. 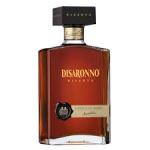 Illva Saronno is extending its flagship Disaronno amaretto brand for the first time with the launch of Disaronno Riserva, a new limited edition release. Made with a base of Disaronno and blended Scotch whisky, Disaronno Riserva is aged in Marsala wine barrels and retails at $349 a 750-ml. bottle. Around 1,500 bottles of the 80-proof expression will begin shipping to the U.S. this fall ahead of the holiday gifting season, targeting the high-end retail and on-premise channels. 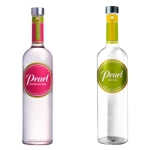 Luxco’s Pearl vodka brand has unveiled a refreshed look, as well as three new flavored offerings, ahead of the summer season. Pearl’s updated package features a more contemporary bottle design, with a beveled glass inset and embossed metal closure, as well as revamped labeling emphasizing each expression’s flavor. Concurrently, Pearl has debuted new Lime Basil, Strawberry Basil and Vanilla Bean flavors. According to brand manager Ashley Ulkus, the basil-infused launches are in response to consumer demand for more herbaceous flavors for their cocktails. The three new flavors will be available as part of Pearl’s Party Pack sampler, which offers a 12-pack of the brand’s most popular flavors and unflavored Pearl Black label.

Pernod Ricard’s Irish Distillers has partnered with Bordeaux winemaker Léoville Barton to create Green Spot Château Léoville Barton whiskey. Initially aged in a combination of ex-Oloroso sherry, new Bourbon and ex-Bourbon barrels, the liquid is then transferred to ex-Bordeaux wine casks from Léoville Barton and aged for 12 to 24 months. The 46%-abv offering is rolling out into key global markets—including the U.S., U.K., Ireland and France—this month and retails at around $65 a 750-ml.