Escondido, California’s Stone Brewing has added Neverending Haze as the newest low-abv beer to join Stone’s year-round lineup. The 4% abv ale is brewed with Mosaic and Citra hops, and a yeast strain that produces citrus flavors. The brew is now available on draft and in 4-packs of 16-ounce cans across the U.S. Neverending Haze is the second beer from Stone’s Pilot Series to make the jump to year-round availability, following last year’s Buenaveza Salt & Lime Lager.

Clackamas, Oregon’s Portland Cider Co. has launched Ciderade, a new sessionable and low calorie cider made from locally sourced apples with added sea salt for electrolytes. The brand will feature several releases each year with a lemon-lime flavored cider as its initial offering. The 4% abv cider comes in at fewer than 100 calories and has 3.5 grams of sugar. The lemon-lime release will be available through April and will be followed by a strawberry-flavored cider for the summer and an orange-flavored cider for the fall. The series will be available in 6-packs of 12-ounce cans, individual 19.2-ounce cans, and on draft in Oregon, Washington, and northern California.

Oregon-based Full Sail Brewing has introduced Haze of the Gods Double IPA as the latest release in its Strong Current Double IPA Series. Brewed with Strata and Mosaic hops, the newcomer is at 8.5% abv and will be available from now through April in four-packs of 16-ounce cans. Haze of the Gods will be followed in the Strong Current series by Lazy Summer Haze Double IPA, an unfiltered brew that will be available from May through August.

Portland Cider Co. has released Bubbly Brut, billed as a Champagne-style sparkling cider. The small-batch cider is made from 100% Northwest apples, fermented separately with two different Champagne yeast strains on neutral French Oak, then blended. Bubbly Brut has 50% more carbonation than the cidery’s other products. It comes in at 6.9% abv with zero grams of sugar and is available in 19.2-ounce cans and on draft. Bubbly Brut is available now through February at Portland Cider Co.’s two Oregon taprooms and select retailers in Oregon, Washington, Northern Idaho, and Northern California. 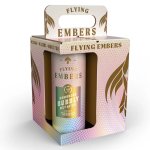 Ventura, California-based Flying Embers has introduced Kombucha Bubbly Brut Nature. Billed as a Champagne-style hard kombucha, the new entry is fermented with real botanicals and Champagne yeast and aged in Chardonnay wine barrels. The 6.9% abv offering has no residual sugars or carbs and is packaged in 4-packs of 12-ounce cans. Flying Embers has three taprooms in Los Angeles, Santa Barbara, and Boston, respectively, and its products are sold in 40 states.

Lawrence, Kansas-based Fields & Ivy brewery is launching Kansas Lager, brewed with 100% barley malt grown in Kansas. Launching through distributor Worldwide Wine and Spirits, the new entry is a Vienna-style lager and will roll out across the state in 12-ounce bottles. Fields & Ivy says it’s likely to be the first lager brewed with 100% Kansas-grown barley malt since 1890 or earlier. Founded in 2019, Fields & Ivy has a 20-barrel production brewhouse, dining room, and beer garden in Lawrence.