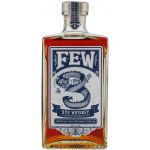 Evanston, Illinois-based Few Spirits has launched Immortal rye, a new whiskey proofed down to bottling strength with tea. The 46.5% abv whiskey is made by blending cask strength Few rye with 8 Immortals tea from Denver’s the Tea Spot. The whiskey does not contain added sugar or other additives. The whiskey’s label art showcases a dragon print that was shown at the 1893 World’s Fair. The initial release is limited—only 6,000 bottles—and is rolling out now across the U.S. for around $45 a 750-ml.

Benriach single malt Scotch whisky, part of the Brown-Forman portfolio, has revamped its core lineup and unveiled two new expressions. The newcomers include Smoky Ten and Smoky Twelve whiskies, retailing at $60 and $65 a 750-ml., respectively. Those offerings join the Original Ten ($54) and Original Twelve ($60) in the range, which has been repackaged and will be hitting the market in its new incarnation next month. Benriach will follow with Twenty-One, Twenty-Five, and Thirty-Year-Old single malts in the U.S. next year. 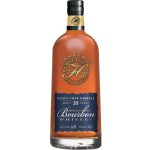 Heaven Hill has announced the 2020 iteration of Parker’s Heritage. This year’s whiskey is a 10-year-old Bourbon matured in heavily charred barrels. The spirit was distilled from a mash of 72% corn, 12% malted barley, and 10% rye, and aged in level 5 char barrels, as opposed to Heaven Hill’s typical level 3 char barrels. The whiskey is bottled at 60% abv and is rolling out now in limited quantities across the U.S. for around $120 a 750-ml. A portion of the proceeds from each bottle goes to fund research and patient care for those diagnosed with ALS.

San Francisco, California-based Gold Bar Spirits Co. has launched Rickhouse Cask Strength Straight Bourbon. The whiskey is distilled from a mash of 80% corn and 20% rye and is bottled at 51.5% abv. With this new release, Gold Bar continues its partnership with the San Francisco 49ers, with Rickhouse named the official whiskey of the team’s Faithful to the Bay campaign. Rickhouse is now available in major retailers across the U.S. and on the company’s website for around $35 a 750-ml.

Minnetonka, Minnesota’s Dashfire has announced a new line of hard coffees, set to launch throughout the state at the end of the month. The 14% abv RTDs will come in three flavors—Rum Café Mocha, Rum Golden Latte, and Bourbon Cold Brew—and all will be available in individual 200-ml. cans. Southern Glazer’s will distribute Dashfire’s hard coffees in Minnesota and the company is planning for a wider release through Vision Wine & Spirits in the future.

Moët Hennessy-owned Belvedere has long looked to differentiate itself by bringing the concept of terroir to the vodka category. Now the brand is introducing its new Heritage 176 expression and a “Made With Nature” platform, highlighting its Polish origins and craftsmanship. Heritage 176 is rolling out across 20 U.S. markets, retailing at $35 a 750-ml. The new offering nods to the 19th century practice of malting rye by kiln-heating—which Belvedere says unlocks distinctive flavors in the resulting liquid—with its distillers applying fire to malt the rye before distillation. It’s intended to be served over ice with a lemon twist.

William Grant & Sons’ Hudson Whiskey has rebranded with more mature offerings and a new, more accessible price point. The distillery’s Baby Bourbon is now Bright Lights, Big Bourbon, a 46% abv whiskey retailing at $40 a 750-ml. Manhattan Rye has relaunched as Do the Rye Thing, also bottled at 46% abv and retailing for $40. The company’s Maple Cask Rye, a whiskey finished in maple syrup barrels, has rebranded as Short Stack and will retail at around $55. The company also has launched Back Room Deal, a new rye whiskey finished in barrels used to age peated Scotch, which will retail at around $55 a 750-ml.