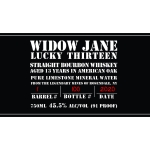 Brooklyn, New York-based Widow Jane has announced Lucky Thirteen, a new barrel pick program featuring 100 barrels of whiskey. Each barrel is aged for 13 years after distilling from a high-rye mash bill. The whiskies are proofed down to 45.5%-49.5% abv, with master distiller Lisa Wicker choosing the final proof after considering where in the rick house each barrel aged. Barrels will be available across the U.S., with Total Wine, plus other retailers in California, Florida, New York, and other states signing on to purchase barrels. The whiskies will retail at around $90 a bottle.

San Francisco-based Hotaling & Co. has added Convite Mezcal to its portfolio. Hotaling will bring three of Convite’s agave spirits to the U.S.: Mezcal Espadín Esencial ($45/40% abv); Mezcal Espadín-Madrecuishe Blend, a $70 bottling at 42% abv made from Espadín and wild-grown Madrecuishe agaves; and Mezcal Coyote, a $160 bottling made from 12-year-old wild-grown Coyote agave that’s bottled at 46% abv. The spirits are available now in New York, California, Texas, Massachusetts, Illinois, and Georgia.

Martini & Rossi, part of the Bacardi portfolio, has launched two new frozen RTD cocktails, Frosé and Frosecco. The 6.5% abv wine cocktails come in 10-ounce packages and can be consumed right from the pouch or poured into glasses. Both are made from Italian wine with natural fruit flavors added and do not contain artificial sweeteners or high fructose corn syrup. Martini & Rossi Frosé and Frosecco are now available across the U.S. for $4 a pouch.

Lucas Bols has relaunched its Bols Liqueurs range with a new formula and packaging. The line, which includes Blue Curaçao, Apricot Brandy, and Peach flavors, among numerous others, is now made with natural botanicals. The Bols Liqueurs bottles have been updated as well: they now feature a new logo, and are more in line with the look of the Bols Genever lineup.

Purcellville, Virginia-based Catoctin Creek Distilling Company will launch #InThisTogether Rye on June 1, with all profits going to charities supporting struggling bars and restaurants. The 40% abv whiskey was blended from spirits left over from the distillery’s barrel select program, from which many restaurant accounts had to abstain after suffering financial hardship due to Covid-19. Catoctin took those previously selected single barrels and blended them into this new “Infinity Barrel” Rye, which retails at $49 a 750-ml. It will be sold at the distillery with curbside pickup and at retailers in Washington D.C., Delaware, and Maryland through distributor Prestige-Ledroit. It’s also available online for direct shipping in Virginia only.

San Francisco-based Hotaling & Co. has added The Arran single malt Scotch whisky to its portfolio. Effective June 1, Hotaling will be the exclusive importer of The Arran’s entire lineup, which includes the Robert Burns Malt; 10-, 18-, and 21-year-old whiskies; and a variety of cask-finished expressions, with retail pricing ranging from $40-$246 a 750-ml.

Sailor Jerry has unveiled a new limited-edition commemorative bottle in partnership with the United Service Organizations (USO). Retailing at $15 a 750-ml., the special edition pays homage to the brand’s namesake, Norman “Sailor Jerry” Collins, who served in the Navy, and will be distributed nationally through the summer season. As part of the launch, Sailor Jerry and Anchor Media are donating $150,000 to the USO, adding to Sailor Jerry’s total contribution of $1 million supporting the USO and other military organizations since 2016.