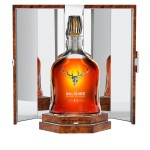 The Dalmore single malt Scotch has unveiled a new ultra-luxury rare whisky collection in the U.S. The Dalmore Rare & Aged Collection includes 35-, 40-, and 45-year-old expressions retailing at $6,000, $8,800, and $14,600 respectively. Made from exceptional casks selected by Dalmore master distiller Richard Paterson, the Rare & Aged series is packaged in bespoke Baccarat crystal decanters featuring a solid silver stag created by silversmiths Hamilton & Inches, holder of The Royal Warrant. The luxury whiskies will be available at select U.S. retailers.

St. Louis, Missouri-based Luxco has announced a new limited edition of its El Mayor Tequila. The new release is an extra añejo expression aged for at least three and a half years before finishing in rum casks. The 40% abv spirit will retail for around $130, with 6,000 bottles available across the U.S. beginning in September. 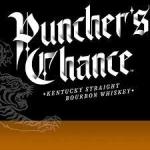 Wolf Spirit Distillery is launching a new Bourbon label, Puncher’s Chance. A marriage of 4-, 5-, and 6-year-old Kentucky Straight Bourbons, Puncher’s Chance is at 45% abv and retails at $35 a 750-ml. The brand has initially rolled out in nine states—counting Southern Glazer’s, Badger, Atlantic Beverage, and Empire Distributors among its distribution partners—with further expansion on the way.

Angel’s Envy has announced a new Bourbon finished in Mizunara oak casks. Launching in celebration of the brand’s 10-year anniversary, the 48.9% abv whiskey is a 50/50 blend of 4-year-old and 9-year-old Bourbon that married in the Japanese oak for an additional two years. Members of the company’s 500 Main club can now preorder the whiskey online and, following the presale, the remaining bottles (out of a total of 1,200) will be available at the Angel’s Envy distillery and in select Kentucky retailers for $350 a 750-ml.

Beam Suntory has released the latest batch of Little Book Bourbon, Chapter Four: Lessons Honored. The whiskey is bottled at 61.4% abv and is a blend of three whiskies aged for at least four years: a 4-year-old Bourbon with brown rice in the mash bill, an 8-year-old high rye Bourbon, and a 7-year-old Bourbon made from a more traditional mash bill. Little Book Chapter Four: Lessons Honored is now available across the U.S. in limited quantities for around $125 a 750-ml.

Donegal, Ireland’s Sliabh Liag Distillers has launched the Silkie line of Irish whiskies in the U.S. Through a partnership with Preiss Imports, the Legendary Silkie and the Legendary Dark Silkie are now available in 21 states across the U.S. The Legendary Silkie is a 46% abv blended whiskey made with double and triple distilled malt whiskies, grain whiskies, and a small amount of peated malt whiskey. The Dark Silkie is a made with a high proportion of peated malt whiskey matured in Sherry casks and is also bottled at 46% abv. The whiskies are now available for around $40 and $43, respectively. 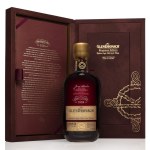 Brown-Forman-owned single malt Scotch whisky The GlenDronach has announced its latest rare, luxury release, the Kingsman Edition 1989 Vintage. The whisky commemorates the upcoming release of the King’s Man movie by 20th Century Pictures and Marv Films. The 29-year-old single malt was matured in Oloroso casks and finished in Pedro Ximénez casks before being bottled at 51% abv. The Kingsman Edition 1989 Vintage will be available in limited quantities across the U.S. market for around $1,300 a 750-ml. This is the second collaboration between The GlenDronach and the Kingsman series. 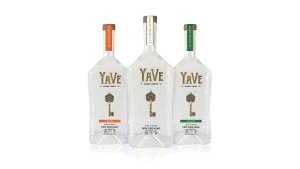 A new upscale Tequila brand, YaVe, is rolling out in New York this month, distributed by Empire Merchants. YaVe launched in New Jersey in July via Allied Beverage, and a Connecticut debut is in the works as well, expanding on the brand’s existing footprint, which also includes California and Colorado. YaVe includes an unflavored Blanco at 40% abv, as well as Mango- and Jalapeno-infused flavored Tequilas bottled at 35% abv. All three expressions retail at $40 a 750-ml.

Kentucky’s Bardstown Bourbon Co. (BBC) and Copper & Kings American Brandy Co. have teamed up for another entry in Bardstown’s Collaborative series. The new release, a 9-year-old Tennessee Bourbon finished for 18 months in Copper & Kings’ Destillaré orange curaçao barrels, is bottled at 50% abv and is rolling out across BBC’s 13-state distribution footprint in limited quantities. The sixth collaboration between these two distilleries, Bardstown Bourbon Company/Copper & Kings Destillaré Orange Curaçao retails for around $125 a 750-ml.

Baileys has introduced a limited edition Apple Pie Irish Cream Liqueur. To back the launch, the brand has partnered with home delivery service Cocktail Courier and celebrity pastry chef/TV personality Zac Young to curate a Baileys Apple Pie “Friendsgiving Kit,” with which consumers can create the label’s signature “Apple of My Chai” cocktail. Baileys Apple Pie retails at $25 a 750ml.

Ketel One vodka, part of the Diageo portfolio, has entered the premixed cocktail market with a new line of Botanical Vodka Spritzes. The new low-abv drinks come in the same three flavors as the brand’s original Botanicals offshoot—Peach & Orange Blossom, Cucumber & Mint, and Grapefruit & Rose—and all are at 3.6% abv per serving. They have 73 calories per can and contain no carbs, sweeteners, nor added sugars. The Ketel One Botanical Vodka Spritzes are launching in Arizona, California, Nevada, Texas, Florida, New Jersey, Ohio, Washington, and Illinois on September 1, retailing at $15 a 4-pack and $4 per individual can. 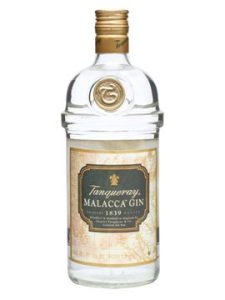 Tanqueray introduced Malacca Gin to the world fifteen years ago, but at the time it failed to generate enough interest in the average drinker to justify continued production.  Of course, it was an excellent expression that was simply ahead of its time; and now that gin is making inroads against its main rival vodka, this is an opportune time to bring it back.  So, it is with great pleasure that Malacca is again being introduced to the market (albeit on a limited basis).  50,000 bottles have been allocated to various bars in the US market.  Hopefully, the demand will be such that it will be more readily available to the general public soon.

You can read my previous reviews of the rest of the Tanqueray line here.

Tanqueray Malacca (80 proof)
Visual: Clear.
Nose: Immediate juniper with an undercarriage of sweet spice.  The citrus works well to add a lot of high lemon-lime notes.  Mouth-watering and engaging.
Taste: Incredibly smooth and light with a palette that ranges from lemon curd to wintry pine.
Finish: Lingering sweetness with a light touch of slowly fading botanicals.
Overall: A gin that fits well within the Tanqueray line while still exploring new territory.
GSN Rating: A-

For more information go to: Tanqueray 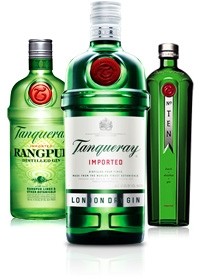 With gin making a huge comeback in the cocktail world, we’re seeing more and more prohibition era drinks making their way into trendsetting bars.  TV shows like “Boardwalk Empire” and the upcoming Hollywood film “The Great Gatsby” are giving the 1920’s an air of glamor.  But why is gin (along with whiskey) so identified with the 1920’s era?

Gin has been around for at least four and a half centuries.  Of course, there are many different styles from the malt heavy Dutch Genever to the independent distiller boutique styles coming out in 21st century America.  What we call bathtub gin was pretty much all you could get during prohibition in the 48 states.  Basically it was roughly distilled vodka, cut heavily with water and mixed with gin flavoring.  You could even purchase juniper extract from the Sears catalogue.

However, one of the mainstays has been and continues to be the English Dry style.  Crisp, elegant, refreshing and dry, it epitomizes the type of gin that most cocktail drinkers expect.  One of the best of these gins is Tanqueray which has been around since 1830, but is no longer distilled in England.  Instead, they’ve moved their headquarters to Scotland.  Regardless, their products are the mark of excellence.  Oh, and the unique bottle shape?  It’s design is taken from the ubiquitous cocktail shaker.

Here are a few prohibition era cocktails for you to try.

Fill a mixer with all ingredients including the olives. Cover and shake hard 3 – 4 times. Strain contents of the mixer into the cocktail glass. Garnish with an olive. The Franklin, a dirty martini, is the drink that brought it all back and the cocktail with which FDR celebrated the repeal of Prohibition.

Pour all of the ingredients into a shaker, fill with ice, shake and strain into a chilled coupe glass. Introduced in the late 20’s, The White Lady was born from a drink named “Delilah,” which included crème de menthe. The Savoy’s Harry Craddock replaced it with orange liqueur and it became an instant classic.  In 2013, it is one of the 10 most popular cocktails served around the globe.

Tanqueray (94.6 proof)
Visual: Clear
Nose: Bright high notes of juniper and pine along with citrus, bits of black pepper.
Taste: Intense juniper with a perfect balance of other botanicals and a slightly sweet but dry midrange.  Elegant and very English.
Finish: Lingering notes of talc, ending in an ultra dry finish.
Overall: Perfect in a martini, and subdued enough to mix well with juices, and liqueurs.
GSN Rating: A

Tanqueray No. 10 (94.6 proof)
Visual: Clear
Nose: Darker and more verdant than regular Tanqueray, with a fresh quality that is unique amongst gins.
Taste: Softer than Tanqueray, yet more citrus forward and spicy.  Tasty on its own, but exceptional as the base spirit in any cocktail.
Finish: Lingering sweet notes with more fresh spruce.
Overall: A world-class spirit that defines the gin category.  Every cocktail is lifted to a higher level with Tanqueray 10.
GSN Rating: A+

Tanqueray Rangpur (82.6 proof)
Visual: Clear
Nose:  Lots of lime on the nose, with only the slightest tinge of juniper.
Taste: Very light and smooth, akin to a lime vodka.  The lime is natural and not bitter.  Refreshing and reminiscent of summer.
Finish: The lime flavor goes on and on.
Overall: A great gin for a G&T or sipping on the rocks.  The lime will overwhelm most gin based cocktails, so keep this for special occasions.
GSN Rating: B

For more information go to: Tanqueray